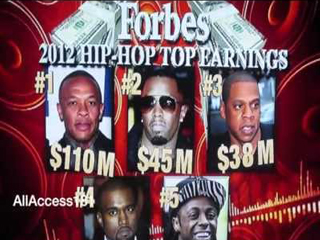 Recently Forbes Magazine listed the top earning hip hop artists of 2012. Sitting at the top of the “Hip Hop Cash Kings List” by a substantial margin was Dr.Dre.   I would like to send my congratulations to Dr.Dre and the other members of this very exclusive club. You have reached the top of your craft and should be proud of your accomplishments.

However, no sooner than the list was published, someone asked, ”how much went to charity?”

Questions such as this make me furious!  It is as though someone who had no hand in earning this money has assumed the right to determine how it will be spent. Where do people find the nerve to ask such things? When did someone’s earnings become anyone else’s business?

I can’t help but think that this is the result of current thought patterns. Those thought patterns seen here and in Europe cause their believers to rail against wealthy individuals and successful businesses and call for the “redistribution” of their money. A good example of this is last winter’s emergence of a group of bums who called themselves the “99ers.” They eventually marched on Wall Street in New York (the Occupy Wall Street Movement). Similar groups descended on cities across America tying up traffic and taking over public parks and city squares.  Despite being interviewed by numerous media outlets, the leaders of these movements and their participants never gave a clear reason for their actions. The only common theme that I heard was unfairness.

Unfortunately, President Obama made things worse by siding with these people. He continually spoke about the large sums of money earned by hedge fund managers and large multinational companies such as Exxon. While he himself is a very wealthy man, he had no problem calling for the redistribution of wealth by supporting the repeal of “tax breaks for the wealthy” and even more hand outs for those who aren’t working.

Given this political climate, is it any wonder that those who have less expect to receive money from those who have more? Yes, it is probably inevitable, but that doesn’t mean it will happen.

Like many of my contemporaries, I am working for the day when I can receive a portion of the success experienced by the Hip Hop Cash Kings. And, when that day comes, I will spend my money as I choose.

What will you do?