Home» Blog » The Beliefs of Black Americans Vs. The Things They Support?
Posted on June 2, 2012 by admin in Blog - No Comments

Imagine that you believed in something.  It could be anything; religious ideology, political philosophy, code of conduct, even life strategy. What ever it was, no matter how you developed your opinion, this is what you believed.  And, like most people, you followed your beliefs and were prepared to defend them against people who didn’t see things your way. This sounds like most of us, doesn’t it?

Then how do we explain the disconnect between the beliefs of Black Americans and the things that they will support? What do I mean? I mean that black people have very specific feelings about a number of issues but they speak and act in opposition to those feelings.

For example, what would you say if I told you that most Black Democrats are as conservative on key issues as Republicans? Would you believe me? Well an aggregate of data gathered by the Gallup Polling organization for the years 2006, 2007, and 2008 show exactly that. On subjects such as whether it was morally acceptable to have a child outside of marriage, have sex between an unmarried man and woman, allow marriage between members of the same sex, or permit abortion, Black Democrats who were polled disapproved in equal percentages as Republicans.

This would probably not have raised much notice except for the fact that Black Americans overwhelmingly vote Democratic. The Democrats’ position is the opposite of the one taken by both the Republicans and Black Americans. How do we explain this? Why would a whole race of people vote against their beliefs? It is no secret that most blacks find the Republican Party and its members to be abhorrent. However, what explains the fact that Black Americans will side with a political party that they are philosophically opposed to and not side with a political party with whom they are in agreement?

I have wondered this same question for years as I’ve tried to explain to family, friends, and other black acquaintances why I’ve voted the way I have. I often think that the Democrats have simply done a better job of convincing Black Americans that Republicans are old, white, and racist. The fact that a Republican president signed the Emancipation Proclamation freeing black slaves and that blacks voted Republican until about fifty years ago, seems to have been forgotten.

But wait, there’s more. Many of the positions taken by Democrats have actually proven to be detrimental to blacks. Take the minimum wage law which was originally enacted as part of the Fair Labor Standards Act of 1938. Numerous studies have proven that it is a barrier to employment by low skilled black workers (especially teenagers). It was even used in South Africa to prevent blacks from competing for jobs with whites. Yet, the Democrats, who are heavily supported by unions, oppose its removal. 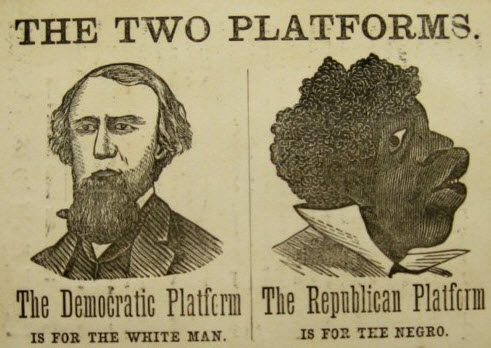 Democrats fought against the passage of every single civil rights law from the 1800’s through the 1960’s.

Many blacks live in communities where the public schools do a poor job of educating their children. If they don’t have the means to send their children to a better school, their kids receive a poor education. Republicans have proposed vouchers to alleviate the problem. Say the public schools in your area spend $10,000 per student to educate their students. With a $10,000 voucher, parents could send their child to whatever school they chose that would accept their voucher. Unlike a black woman who was recently in the news for sending her child out of their district to obtain a better education, parents with a voucher wouldn’t be sent to jail. Again, because of the political campaign contributions that Democratic candidates receive from teacher’s unions, Democrats vote against the passage of any laws that would permit school vouchers.

I say that it is time for Black Americans to take a hard look at which party is on our side on the issues that affect us and vote accordingly.

What do you say?