Today there are many ways to get current news stories. These include television which now features a myriad of cable networks.  There is also the internet with its instant notification of news stories which can be accessed via computer(desktop, laptop, or handheld) devices. Finally there are old technologies like radio (terrestrial or internet), newspaper, and magazine.  This plethora of mass communication sources has made it difficult for any of them to stand out. 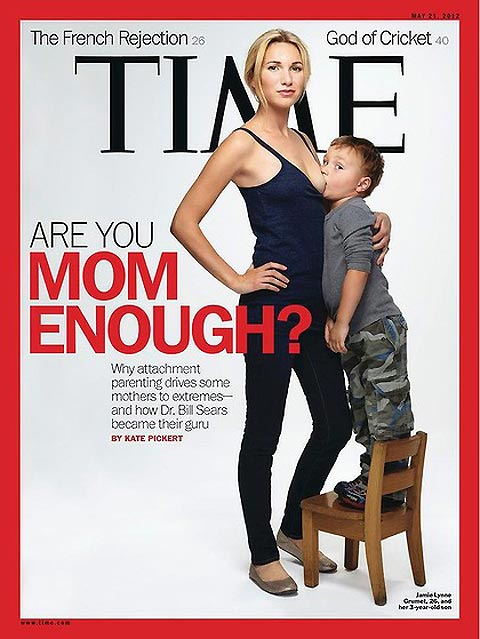 Yet, every now and then one of them does. I’m referring to the cover of a recent issue of Time magazine where a young mother is seen nursing her son who is standing on a chair. The fact that the boy is almost four years old is of course the point of controversy.  Time’s editors say that the reason they ran the photos (yes, there are others!) was to commemorate the twentieth anniversary of a book by Dr. Bill Sears who advocated something called “attachment parenting”. Along with nursing their offspring past the age that most people would consider normal, a mother and father  who are “Sears advocates” would let their children sleep in their bed. These and other tenets supposedly help to redefine parenting and motherhood.

For me, however, there is a larger issue at work here. That issue is nothing seems to be private anymore. A college professor that I deeply respected always told us that everyone has two lives; a public life and a private life. Today the lines between the two lives seem to have blurred if not disappeared completely for some people. So what’s my gripe?

It’s really very simple. If Jamie Lynne Grumet believes in the teachings of Dr.Sears, why did she pose for the cover of Time magazine? She could have nursed her son until he was a freshman in college for all I care. The reason she and the other women posed for Time magazine was to make a point to the rest of us who may not approve of their actions. They knew (as did Time’s editors) that this would create a debate about how parents raise their children. If they truly believed in what they are doing, they could have done so without informing the rest of us. This is America and the way someone raises their children is for the most part their business. As long as they are not causing any obvious harm to their kids, what they do is none of our business. Here, however, they wanted to make it our business.

Remember the fuss over parents who home schooled their children? They preached the benefits of home schooling while others spoke of the problems these children would face because they weren’t learning to socialize with their peers. Again, is it really our business if a mother and father choose to teach their children at home?  No, it isn’t our business.

So why do some people insist on making it our business? Why would a New York politician send semi- nude pictures of himself to various women over the internet? Why do many women post nude pictures of themselves on various social media? Why would a woman with more than seven children agree to pose nude for a magazine? Why would a family with almost twenty children agree to be the subject of a reality show which exposed their private life? I say it’s because they think there is something special about their private life and they want us to see it.