Let me get one thing straight. I am a sports fan (fan is short for fanatic for those of you who aren’t aware of how the term came about)! Like most sports fans, my seasons are defined by which sport is played at that time.  Late spring brings the end of basketball season (only the pros in all sports for me!), and the start of auto racing and golf. Late summer starts the football season and begins to wind down the golf and auto racing seasons. Fall moves football towards its Super Bowl Championship end in late January or early February while beginning the National Basketball Association’s 82 game march towards its championship in June.  I love them all.

So it may come as a surprise to those who haven’t heard one of my radio shows that I am against my adopted home town of Richmond, Virginia building a new baseball stadium for our current team, the Flying Squirrels. In fact, I am against using taxpayer money to build any sports stadium anywhere. Just today, National Football League commissioner Roger Goodell flew to St.Paul, Minnesota to help Zygi Wilf, the Billionaire majority owner of the Minnesota Vikings, coerce the Minnesota Senate into paying for a new stadium. Meanwhile, what would the citizens of Minnesota do with an empty 80,000 seat stadium? Remember, there’s no guarantee that the new stadium would  be built on the site of the old stadium. Michigan taxpayers got $583,000 for the sale of the Pontiac Silverdome which they built 35 years earlier at a price of $55.7million. It had sat vacant since 2002 when the Detroit Lions moved to Ford Field. Even worse, taxpayers roared up $1.5million a year just to maintain it. 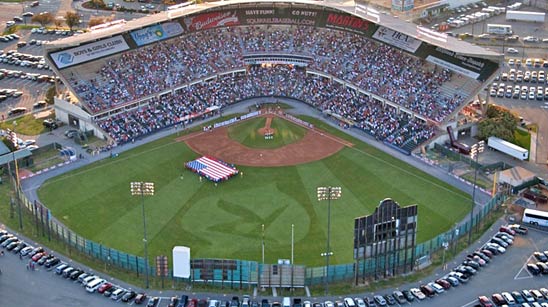 So why should citizens have to put up the money to build a stadium for a billionaire?  Why should the citizens even put up the money for a millionaire like the Richmond Flying Squirrels owner Lou DiBella? Can’t he get a loan like any other businessman? After all, he’s not going to share the money he makes from his business with the taxpayers.  The city of Richmond is currently facing a $24million short fall to fund our public  schools, yet our mayor Dwight Jones not only wants to build the “Squirrels” a new stadium, he wants to tear down and build a new coliseum. How is this possible?

It’s very simple. The ownership has subtly floated the notion that if they don’t get a new stadium, Richmond will lose the Squirrels. I say let them go. The Squirrels have been minor league affiliates of the Yankees(twice), the Oakland Athletics, and the San Francisco Giants since their founding in 1972. Ownership and locations have changed numerous times during that span as well.  What guarantee is there that Richmond won’t get stuck with an unused stadium which happened when our previous team the Richmond Braves decided to leave for greener pastures?

There is no guarantee. However, my position is that public money should not be spent to help a private business. Period! Ever! Our society has started down this slippery slope in complete defiance of the Constitution and just plain good sense.  If a business man or woman wants to take the risk with their own money, then they deserve the reward. Taxpayers should not be saddled with the debt a project like a stadium incurs.

So, how do the Squirrels get the new stadium they say they need? That’s easy. I say we sell them the current stadium and let them build new or remodel. That way they have a vested reason to stay, they keep all profits and losses from the stadium, and the taxpayers get baseball without the debt.

What do you say?

One comment on “New Stadium? Richmond Don’t Do IT…”